Normally, when people think about the dark web, most of the time the matters like the online marketplace for drugs, exchanges for stolen data, and other illegal activities come forward.

Nevertheless, there are legal reasons why people prefer to use the dark web, among whom there are political dissidents and people who want to keep certain information confidential.

People who use the dark web can maintain their confidentiality and express opinions freely. However, it has also a bad reputation for being involved with unlawful or unethical activities.

What Is Dark Web?

The dark web is encrypted online content that is not indexed by traditional search engines. Using specific browsers like TOR can be the only way by which it can be accessible. In terms of using the dark web, there involved huge privacy and anonymity compared to conventional websites.

Delve Deep into the Dark Web

As its name says, the dark web can be said a secret underground network. It consists of plenty of websites that are hidden from the public eye. Hence, these kinds of websites and their contents can’t be found in conventional search engines like Google.

Traditional search engines provide results as they contain indexes of website links. These sites are ranked according to keywords and relevancy. On the contrary, the dark web uses information that isn’t available on other search engines.

These types of information include content ranging from individual accounts, such as email, social media, and banking data as well as professional databases and documents.

The dark web concept originated in the late periods of the twentieth century. There involves a lot of material to get it worked, however is not very much to do once the entrance is completed.

A huge amount of content on the dark web is silly, unimportant, and non-resourceful. But, it’s much easier for someone to get a site there and grab attention. As of 2020, tech and media giants have not very much to do to influence the dark web.

From the early age of the internet, the dark web has had the notoriety of being the haven for illegal activities as criminals used it for serving their hidden purposes.

Whatever roles the dark web plays in illegal and unethical transactions, it also serves as a social outlet for people who might not express themselves otherwise. It also gives legal authorities the additional tools to understand and capture perpetrators of outlaw activities.

People often mix up the dark web with cryptocurrencies as it’s often used to make purchases there. But, these two are not all the same. Setting up websites on the dark web is comparatively easier, and the persons behind it remain anonymous.

Many dark websites possess only information rather than expressing the ability to buy or sell something. Despite this, cryptocurrencies like Bitcoin or Monero are often used for transactions on the dark web, but none have to use the dark web to use cryptocurrencies.

Many dark web websites contain only information rather than the ability to purchase or sell anything. In fact, cryptocurrencies like Bitcoin and Monero, are sometimes used for transactions on the dark web, however, you don’t have to use the dark web to transact cryptocurrencies.

History of the Dark Web

Officially, the dark web, first, appeared in the early 2000s, along with the creation of Freenet. Ian Clarke was the developer of Freenet who created it to secure users against cyber intervention and cyber offense.

This system still exists today and provides users with expressing themselves freely so that it’s not possible tracking them online.

It is now one of the most common browsers to access the dark web that uses databases to help people go ahead in finding the information they require.

Especially, cybercriminals have used it extensively because digital currencies often hide the identity of the people who buy and sell on the dark web.

As the dark web is associated with certain unlawful activities, there have been calls for regulation to control its negativity.

For example, the G20 and the Financial Action Task Force (FATF) both asked cryptocurrency companies to provide information on buyers’ and sellers’ online transactions.

This is especially helpful for law-enforcing authorities to track down criminal organizations and their hidden activities. 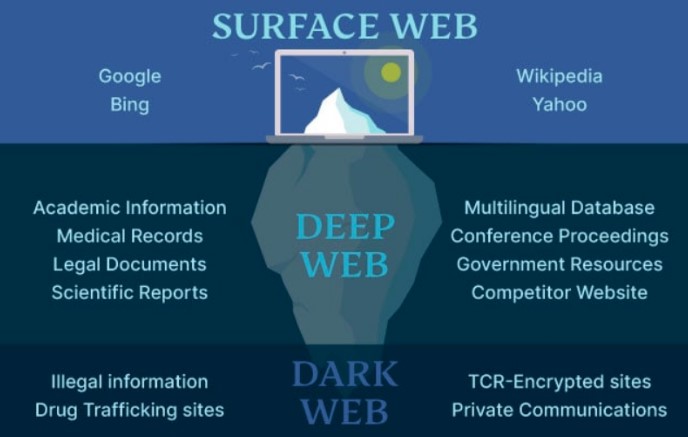 Though many people think the dark web and the deep web are the same things, these are two are not the same things. The dark web is just part of the Deep web. The deep lies underground and it doesn’t have content that is said to be dark.

The deep web is also known as the invisible web or hidden web. Accessing information like this requires a login. These kinds of content are preserved in the case of online banking, pay websites like Netflix and Amazon Prime, and File hosting services like Dropbox, as well as in private databases.

One thing is needed to be noted– the information on the dark web can also consist of anything on subscriber-only databases rather than anything outlawed.

Advantages and Disadvantages of the Dark Web

In maintaining privacy and expressing free views, the dark web assists a lot. To people remaining at risk of being terrorized by stalkers and other criminals, privacy is really essential.

They can use it as an alternative tool. In addition, the growing tendency of autocratic authority to track posts on social media can also make it difficult to engage in honest and free discussions.

In that types of cases, the dark web can be beneficial.

Through accessing the dark web, many law enforcement societies can track down certain criminals who act very furtively.

For example, accessing the dark web and finding a criminal can pave the way for identifying notorious IT criminals and taking action against them.

It was obvious that some people abused the power associated with the dark web by making it a shortcut to engaging in crime. For instance, the combination of the dark web and cryptocurrency made it much easier for some people to commit crimes, especially speculators.

At the time of development, the dark web promised privacy to its users. However, now it can also be used to disrupt the confidentiality of others. After being stolen, elements like private photos or videos, medical records, and financial information have been shared or spread on the dark web.

While the dark web promises privacy to its users, it can also be used to violate the privacy of others. Private photos, medical records, and financial information have all been stolen and shared on the dark web.

In essence, the dark web ensures privacy and freedom of expression, as well as allows low-enforcing authorities to locate criminals. But, it expands paths for engaging in criminal activity easily and can be used to violate the privacy of others.

This very matter reminds us of the old saying about the internet itself: “Whether the internet is good or bad, it depends on the users.” The same thing can be applicable to the dark web.

Example of the Dark Web

If you want to go on the dark web to see what information you have there. By using a virtual private network you can install the TOR browser on your system. TOR is a VPN that allows people to use a public network.

Its work procedure is like transmitting information on a private one and gives you privacy on a public network.

There’s a risk in going to the dark web. So, you’ve to install some security software as there’s a chance that you may come in touch with malware and phishing scams.

As you surf, you’ll probably notice that dark website addresses end with the .onion extension rather than the traditional .com, .org, .edu, etc. One word of warning, though.

Make sure you have some security software installed because there’s a good chance that you may come in contact with malware and phishing scams.

Is the Dark Web Illegal?

Contrary to the common thought of people, and as its name implies, accessing the dark web isn’t illegal. For example, someone can go on the dark web and post their thoughts about political ideology without any fear of being interfered with by government officials or other authorities.

How to Get on the Dark Web?

As stated earlier, you can access the dark web by installing anonymous browsers like TOR. After the installation, the browser works the same way as conventional ones do.

However, as these kinds of browsers don’t use an index to locate the desired information, it can be a little hard to access the expected information through it. Hence, you’ve to secure your computer and personal information by installing security software.

How to Find Out Your Information If It’s on Dark Web?

The dark web can be dangerous for you as your personal information like banking, social media, email accounts, mobile, and phone numbers might be up for sale on the dark web.

What to Do If Your Information is on the Dark Web?

In order to protect your information, you can take a number of steps. Then, you have to change your passwords, and check the credit card reports for finding out if there are any discrepancies. Then inform your bank, and put a freeze on your credit to prevent it from being compromised with the detrimental entity.

When you consider the history of the internet, the dark web is relatively a newer concept. People can use it to remain anonymous without fear of unexpected harm if they express themselves freely.

However, the amount of confidentiality it provides made it gain a bad reputation as bad people use it for illicit activities.

If you want to use it for no illegal purpose, it’s as simple as installing and using a private browser or Using a VPN.

But, to do this, you’ve to make sure your personal devices remain safe and secure.