However, the creator of this interesting, drastic technology is known as ‘Satoshi Nakamoto.’ The fact is, it’s still not certain who’s Satoshi Nakamoto.  Is he a person or a team? Let’s try to get some ideas to be clearer about the matter.

Who developed Bitcoin, authored the bitcoin whitepaper, and deployed its real reference implementation, is known as Satoshi Nakamoto. It’s presumed that Satoshi Nakamoto is the pseudo-name of the person or persons behind it.

‘Nakamoto’ is also the inventor of the first blockchain database. Bitcoin has been introduced to the world in 2008, while ‘Nakamoto’ was found to be active in the development of Bitcoin up until December 2010.

According to some information, the work of code writing for Bitcoin began in 2007. He or under his consent, one of his colleagues registered the domain for bitcoin. It has been named www.bitcoin.org.

Including the details, on October 31 of that year, Nakamoto published a white paper on the cryptography mailing list. It was published on metzdowd.com that described a digital cryptocurrency named Bitcoin. So, Nakamoto is thought to be the creator of bitcoin.

Later, in 2009, he released version 0.1 of the Bitcoin software, and launched the network by defining the ‘Genesis Block of Bitcoin.’ Included in this coin base transaction of the block, was the text, ‘The Times 03/Jan/2009 Chancellor on brink of second bailout for banks.’ That day, the incident has been published in the UK newspaper The Times.

Up till mid-2010, Nakamoto continued to work in collaboration with other Bitcoin software developers. Within that time, he made all the modifications to the source code.

Afterward, he transferred control of the source code repository, along with the network alert key to Gavin Anderson. Various related domains were transferred to prominent numbers of the Bitcoin community, and his active involvement in the project was stopped as well.

The newly invented technology contributed a mass amount of wealth to Nakamoto.  As the owner of 750,000 and 1,100,000 bitcoin, as of November 2021, his net worth became $ 73 billion. If this value is taken into consideration, he would be the 15th richest man in the world.

Though at times, he delivered public commentary on banking and fractional-reserve banking, while sharing technical matters,  Nakamoto has never revealed personal information.

Up to 2012, the profile given on the P2P Foundation site, it was claimed that he was a Japanese resident, aged 37. However, many people think him not Japanese because of his native-English application. 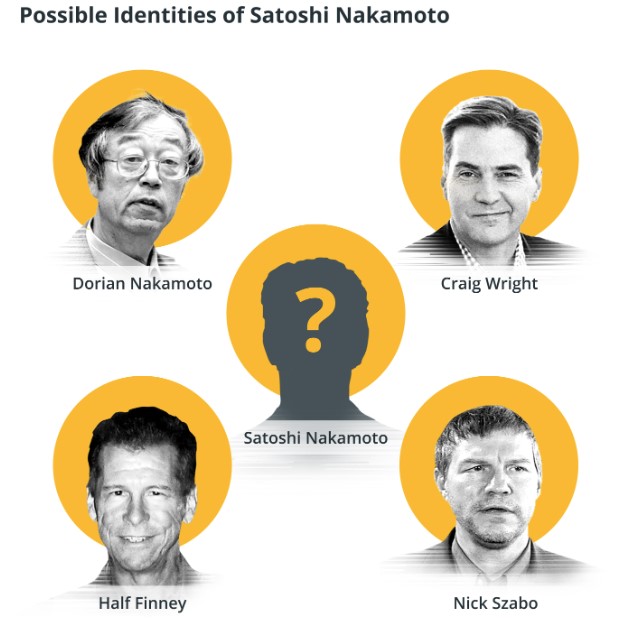 Various speculations are in the air about the identity of Nakamoto, the creator of bitcoin. Some people think it’s a team of people who express themselves in this name.

According to security researcher Dan Kaminsky, Nakamoto could either be a ‘team of people or an unidentified ‘Genius.’ A developer named Laszlo Hanyecz, once communicated with Satoshi Nakamoto via e-mail. He thinks it’s so good a code that it’s too hard for only one person to develop it.

There is the usage of British English in both source code comments and forum postings. The expression ‘bloody hard’,  and terms such as ‘flat’ and maths’, and spellings like ‘grey,’ ‘color’  has made some people like Laszlo think that the mastermind behind this project is of commonwealth origin.

That means, he/they is from the country, which was once ruled by British Empire.

The timestamps for each of the posts of Satoshi Nakamoto’s Bitcoin forum posts were graphed by Swiss Software Engineers Stefan Thomas. The chart shows no post between 5 a.m. and 11 a.m. GMT (Greenwich Mean Time), which is 2 pm to 8 pm. according to Japan Standard time.

It suggests that a person living in Japan can’t sleep in that time period intervals.  Hence, many tech analysts strongly believe that Nakamoto is none of Japanese origin; rather it’s congruous to the people of European origin.

The real identity of Satoshi Nakamoto is still unknown, however, speculations generated regarding it focused on a few cryptography and computer science specialists.

Most of them are of non-Japanese descent.  Among them highly notable is Hall Finney.  He is said to be a pre-Bitcoin pioneer and as the first person, he used the software, filed bug reports, and initiated necessary advancements.

In addition to the namesake, Journalist Leah McGrath Goodman of Newsweek magazine pointed to some facts that suggest, with some certainty, that it’s he who was the creator of bitcoin. In a face-to-face interview, Goodman asked him about Bitcoin.

Then, Nakamoto seemed to confirm his identity by saying that he is no longer involved in that and cannot discuss it.

People like the publisher of the paper name ‘Bit Gold’ and decentralized currency enthusiast Nick Szabo and Australian Academic Craig White, computer forensic analyst, along with some other tech specialists, from time to time, are suspected to be the creator and the real personality behind Satoshi Nakamoto.

But, the fact is his real identity is still anonymous. In April, it will be 10 years since the creator of bitcoin Satoshi Nakamoto sent his final email and has not been heard from since.

For those who know little about Bitcoin, guessing who Nakamoto is, is an interesting topic. To this day, though, he remains anonymous. Let’s try to discover some of the reasons behind it.

It’s strongly believed that Satoshi Nakamoto had the foresight that if Bitcoin was to be successful as a decentralized currency, it would need organic growth. No leader or founder-father is essential here.

Satoshi  Nakamoto’s any kind of commentary or announcement could be misinterpreted as investment advice, which would result in price movement. The same scenario we see with Charlee Lee, the creator of Litecoin.

He decided to sell all of his LiteCoin holdings. Later, in a post on Reddit, he explained that whenever he tweets about the Litecoin price or does something like that, then many people accuse him of doing it for personal benefit. Some people think he is shorting LTC.

There was another possibility of a huge problem. Any suggested change to the protocol supported by Satoshi Nakamoto that goes against the views of some influential Bitcoin users would create big disagreements.

For example, such a scenario took place in 2017, with the contentious hard fork to Bitcoin Cash, and in 2018, when Bitcoin Cash SV. It divided the Bitcoin community into several factions.

Another vital reason for the creator of Bitcoin remaining behind the curtain is to avoid the attention of authorities and criminals. For example, in 1998, a Hawaiian resident named Bernard Von NotHaus, created a private currency called ‘Liberty Dollar.’

This currency flourished fast, but the FBI and the secret service raided its minting operation. Later on, authorities shut down the currency and NotHaus was found guilty.

Finally, as Bitcoin is available for all to use, it can be used to pay for both legal and illegal purposes. For example, fiat currency was a popular payment method on the darknet marketplace.

It has gained infamy as it had been used on the now-obsolete Silk Road. Ross Ulbricht, the creator, and operator of the notorious dark web was sentenced to life imprisonment for his role in making paths for the trade of drugs and other prohibited goods.

The same fate may await Nakamoto if he revealed his true identity.

Whether the real identity of the creator of bitcoin, or the interesting and fascinating things of 21 st century, it’s undeniable that this non-identification made the cryptocurrency more mysterious, more cryptic, and grabbed greater attention of the people as well.